Where there's lots started... and even a few finishes!

While I mainly blog about my sewing progress, I thought I'd share a few of my reads this year
- it's all about fun, variety & distraction!
Here's my reading roundup for February "A Slow Fire Burning" by Paula Hawkins {some might remember "The Girl On The Train} twists & turns just as a thriller should.
"A young man, Daniel Sutherland, has been found deceased on a houseboat. Leaving the scene of the crime is Laura, a young woman known to police. Fortunately for Daniel, there is a noisy neighbor Miriam who takes detailed records of all of the comings and goings. However, Daniel's mother, Angela, died just a few weeks before Daniel in an accident. Are these deaths connected? Was it Laura? What do we really know?"
While I found it somewhat slow going, the writing was superb. It was the pacing and the large cast of unlikable and unreliable characters that bogged me down a bit.

My fav this month was 'Before the Fall' by Noah Hawley which I read while away on a holiday. A plane crash, eleven on board, only two survive, Scott a painter with a troubled past and the young boy, J.J. that he manages to save. Like when the Malaysia aircraft went down, there is speculation about why, who. Controversial figures were onboard this plane, could they have been targeted? Is Scott a hero or villain? Either way he has lost his right to privacy.
I found the in-depth look at what goes on after a disaster interesting, the role of the media and all the conspiracies frightening.
There are so many layers to this novel, it is difficult to describe without spoiling the entire story. 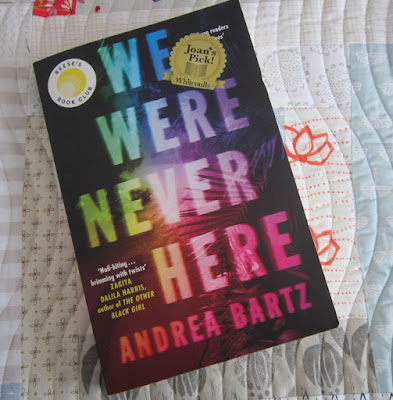 An annual backpacking trip has deadly consequences in this chilling new novel from the bestselling author Andrea Bartz.
Kristen and Emily, drop everything for six months of wanderlust. They travel to Chile and Cambodia and meet up with two very unlucky backpackers.
They wind up in a little situation.... they need to pull it together quick, think, no one at the hotel speaks English. They need to hide the body quick. OMG what have they done?
I had a lot of hope for this one. There were some strong parts, but yeah, no. 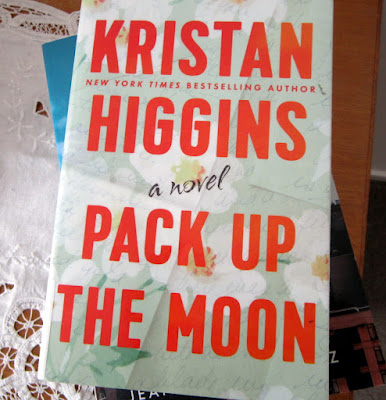 Well I haven't read this one yet, it was a julielouread recommendation. According to reviews, "Pack Up the Moon" is an emotional love story about a woman dying of a terminal illness. This is a story about grief, love, loss, acceptance, and embracing life... and I need to be in the right frame of mind to start this one.
Love to hear your thoughts if you have read any of these too ?
Linda
Posted by Linda @ kokaquilts at 18:04 1 comment:

There's a vintage vibe happening in my sewing room 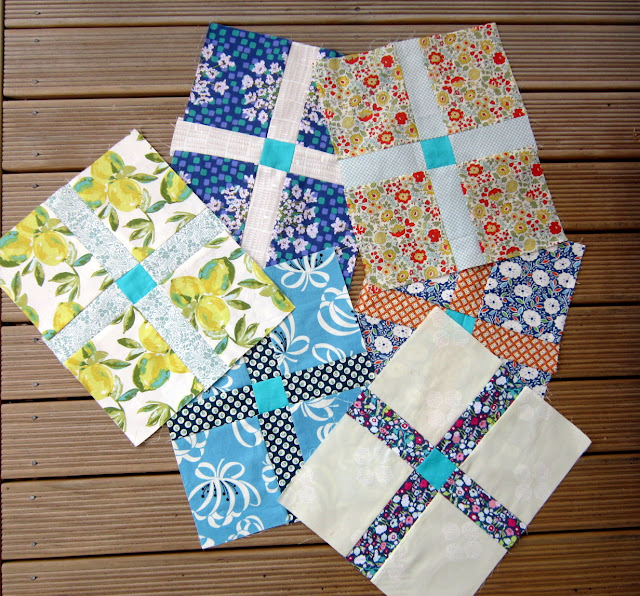 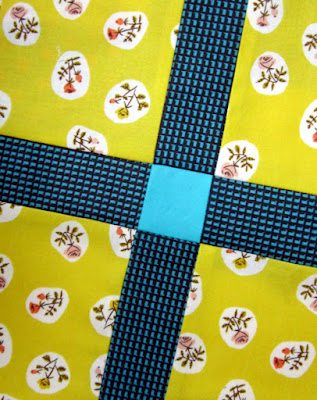 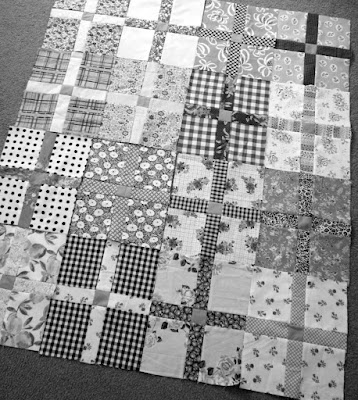 - checking my values out
and I'm thinking I need to add a few darker prints into the next batch. 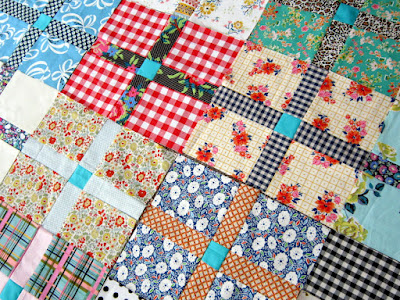 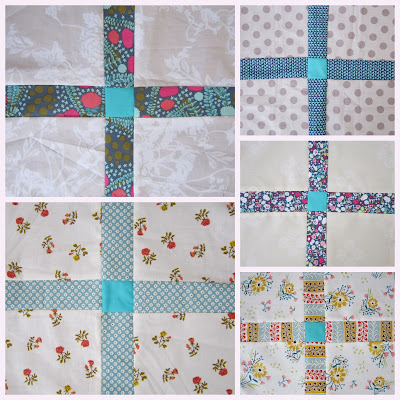 - adding in a few lights 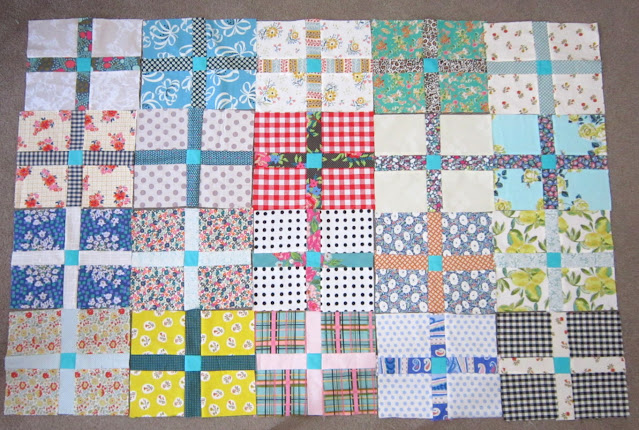 - down on the design floor
Yes, it's growing! 20 outta 56 blocks made now … not quite on the home stretch yet though! I'm enjoying piecing this. Loving all the florals mixed up with a few spots & checks, and I think the teal/green centers on the blocks are a great way to pull my fabrics together. Until next time, Linda
Posted by Linda @ kokaquilts at 17:13 6 comments:

Super excited to be making a start on the ‘Crossroads’ quilt from Treehouse Textiles this week.
It's simple ✔️
and it's fabric driven ✔️ 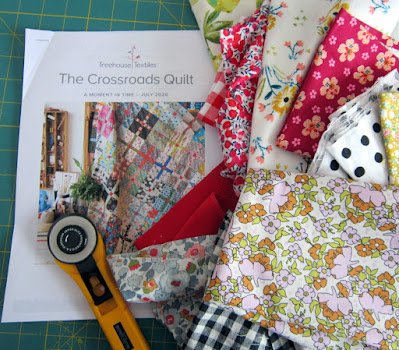 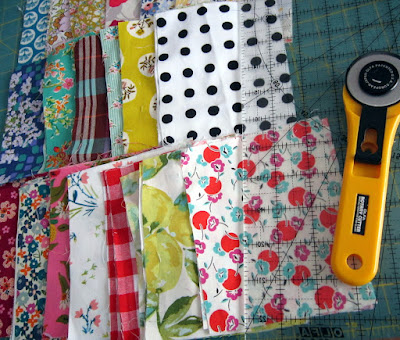 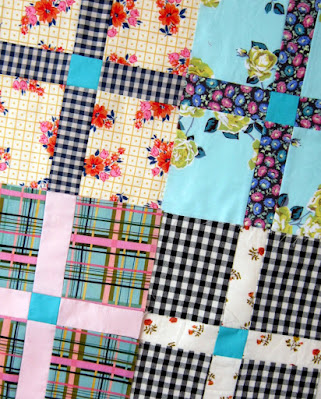 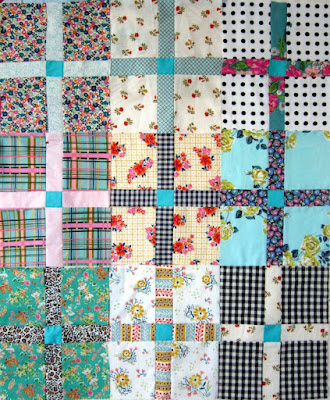 Over the past month as I've been working on other things, I've been cutting out rectangles too. Today I thought I'd sew a few up and make sure if I was in fact still keen to make enough blocks for a quilt top.
I've increased the size of my blocks a smidgeon and swopped out the centre red squares for a teal - it seems to suit my stash better I think.
It’s a lovely scrappy quilt, with a real vintage vibe. I've included some of my favourite fabrics from several years of stash building! I love them so much but now l'm thinking l need to stop {unintentionally} hoarding and start cutting it up! Super fun pairing up prints, and the simple piecing is perfect for letting those fabrics shine.
Here's the next batch all ready to sew … 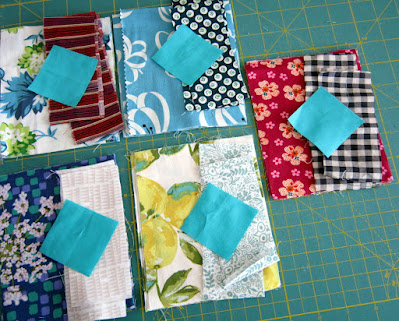 There's something delightful about this wild mix of prints and colours … what's not to love! So yes, I'm continuing the road trip and looking forward to seeing where all these crossroads take me.
Linda
p.s we are off on a real road trip next week, so looking forward to some time away.
Posted by Linda @ kokaquilts at 17:40 9 comments:

block of the month #2

Here's a peep at my progress on my 2022 Pas de Deux modern sampler
I'm planning on using my scrappy stash here for this project,
#fabricscraps make the best patchwork magic happen!
This month's patchwork ensemble starts with a showy on-point square,
but can you spot what happens next?

- can you see those stars forming in the low volume sections? 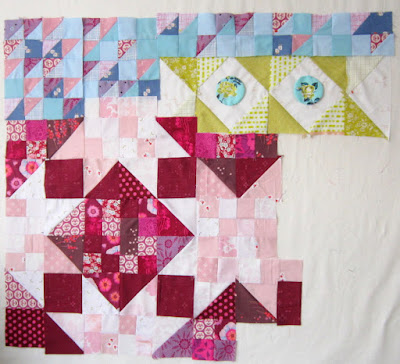 Life is super busy just now and I've hardly been in the sewing room.  I have, however, found a little time to read this month. "The... 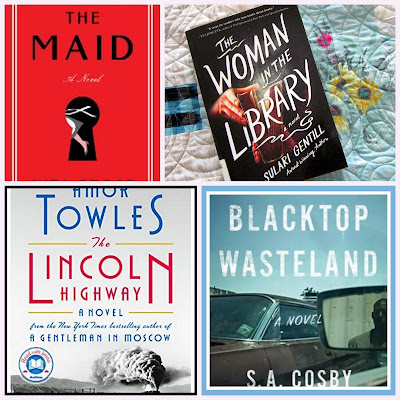