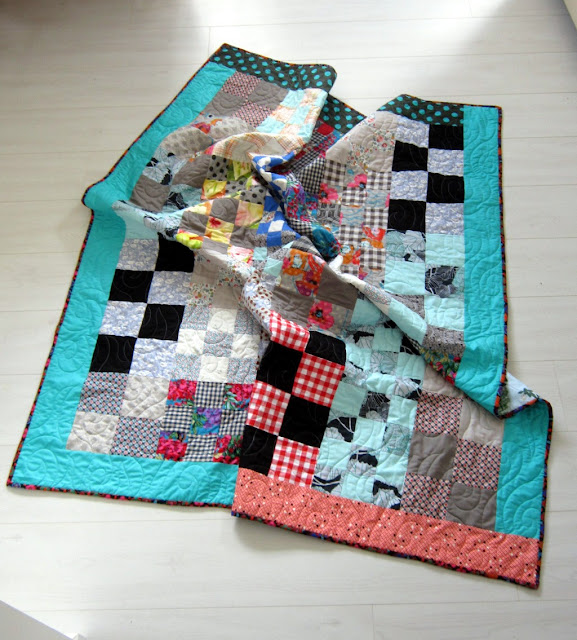 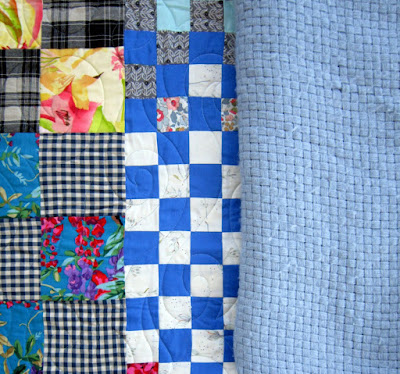 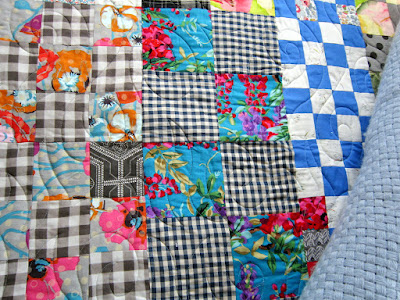 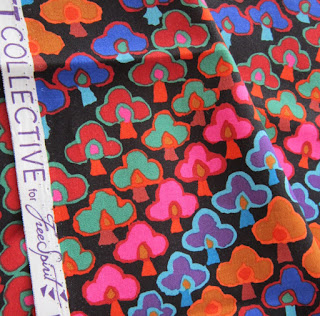 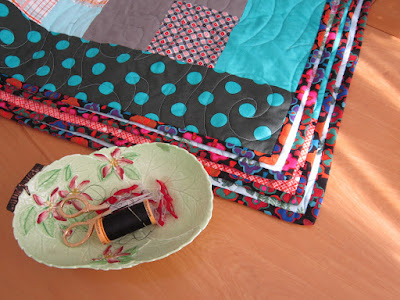 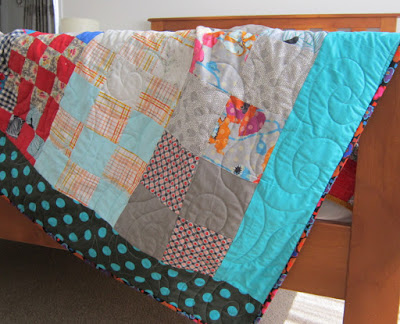 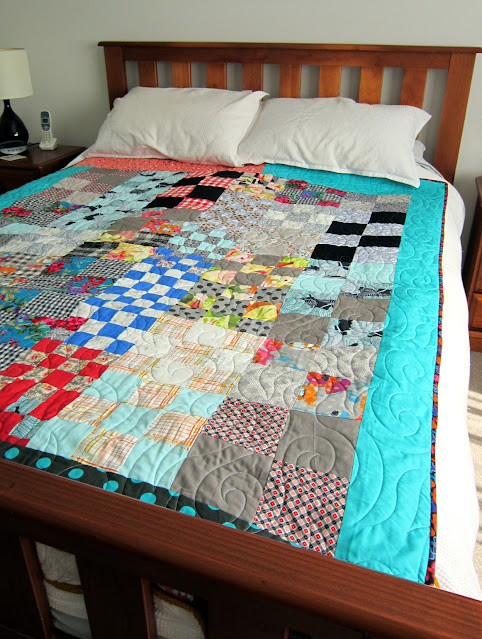 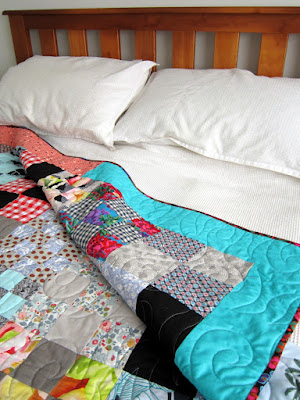 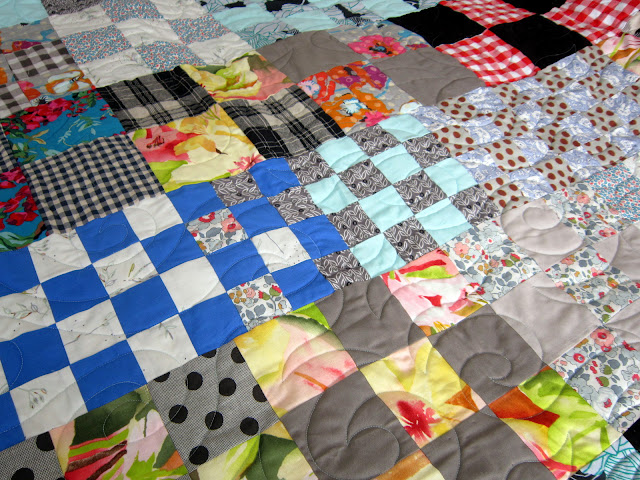 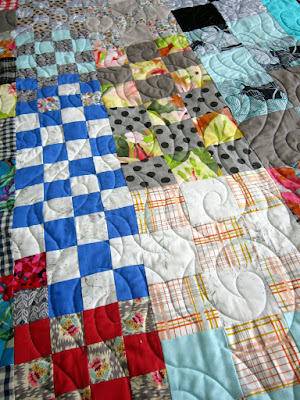 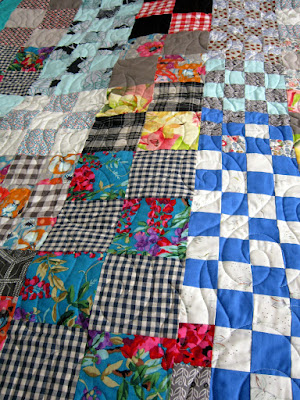 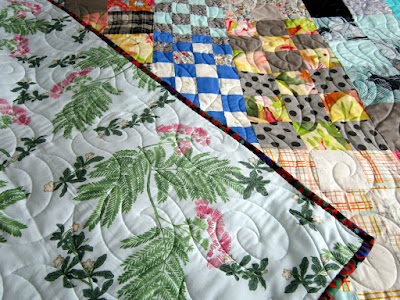 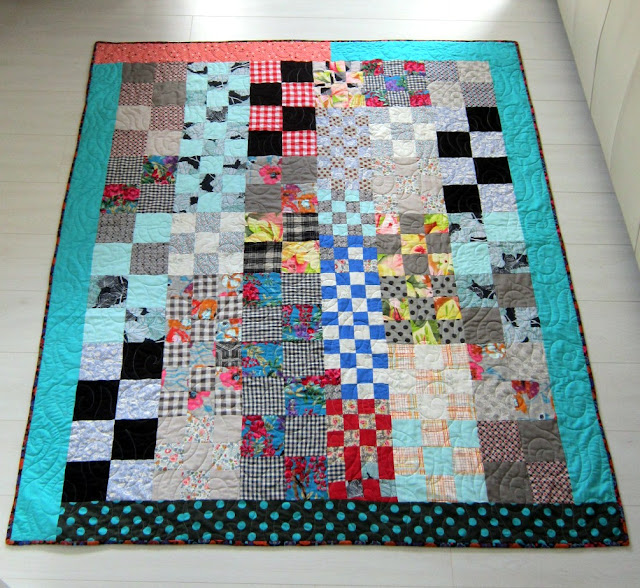 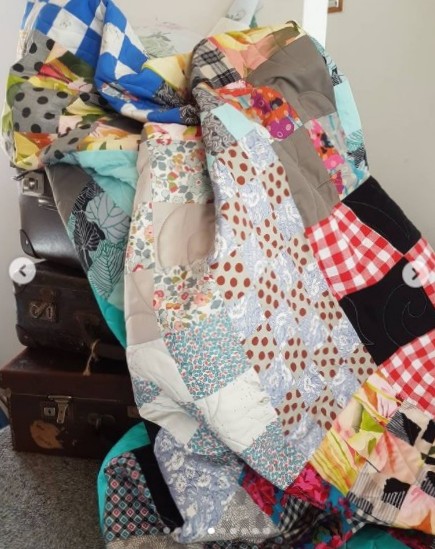 - reposted pic from Quiltmekiwi
I've been busy over the Easter weekend adding the binding to another quilt. It's my 'nine patch action' quilt, based around a favourite block of mine, the good old nine patch.
I started out sort of following the picture of a vintage quilt from Roderick Kiracofe's book "unconventional and unexpected", see here.
There's quite a mix of favourite fabrics in this quilt top, including Liberty, solids, ginghams & AMH. I found the trick to making a fun {but not visually overwhelming} scrap quilt like this, was to definitely have a few simple 'rules'. So I included a few longer strings of the same {or nearly same} blocks. I also added some solid fabrics, which help to give a bit of a break from all the busyness. And, adding those larger 4patches helped create some scale contrast.
Loving the mix of four/nine/sixteen patches!

I had it machine quilted by Leeanne from quilt me kiwi {great teamwork!} in an edge to edge pattern, called 'breezy'. On the back I used two Amy Butler sateen florals, which made for a very soft & very cuddly drape to the quilt. Choosing the binding was a tad tricky, in the end I settled on 'trefoil' a recent Kaffe addition to my stash. It seemed to pick up lots of those little bits of colour dancing all around the quilt.
Finished quilt measures 60" x 70".
Linking up with Cyndy for 'oh scrap' here
Until next time, Linda
Posted by Linda @ kokaquilts at 12:15

Thanks so much for taking the time to leave me a comment. I love to hear your thoughts.
For those of you who are a 'no-reply' blogger, I will respond within the comments section, so please do check back if you've asked a question or wish to chat.
Happy sewing!

I was determined to get another 'finish' in this year, and this is it "Second Star to the Right". I seemed to have taken a... 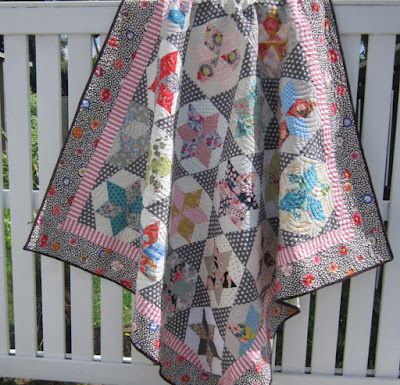